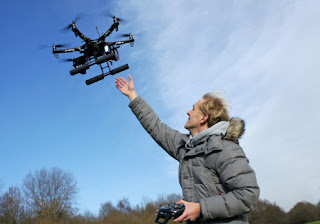 This will definitely affect anyone who owns a drone which weighs more than 250 grams because the UK government has announced plans to introduce drone registration and safety awareness courses for owners of the small unmanned aircraft.
It is expected that larger fines for those flying in restricted areas will be enforced and that a more precise definition of those restricted areas will be expected of manufacturers.
“Increasingly, drones are proving vital for inspecting transport infrastructure for repair or aiding police and fire services in search and rescue operations, even helping to save lives,” Callanan will announce. “But like all technology, drones too can be misused. By registering drones and introducing safety awareness tests to educate users, we can reduce the inadvertent breaching of airspace restrictions to protect the public.”
The Department hopes that a mandatory test will ensure pilot’s understand the Civil Aviation Authority’s rules, while a drone registry could deter misuse of the quadcopters. It has also suggested adding new warning signs at no-fly zones and mulled making it a criminal offense to misuse drones.
Critics said it would be expensive to set up a regulatory body – but the Government estimates the drone industry will be worth billions by 2025.
CREDIT: bbcnews
Related Topics:
Up Next

How to Register your Brand Domain Name.

Domino’s is launching a pizza delivery robot car for customers

Phone app that alerts users to look up while taking a walk.