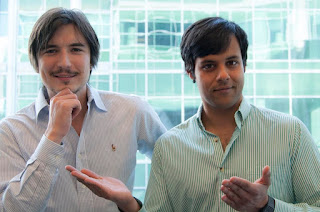 The App is called ‘Robinhood’ and its co-founders Baiju Bhatt and Vlad Tenev want everyone in the stock market not to pay any broker or get charged for each trade.
Robinhood recently got $110 million in Series C funding. It’s valued at about $1.3 billion and its user base is made up mostly of young Americans.
“There’s a lot of wealth being created on Wall Street and it was coming to the top 1%,” Vlad told CNNMoney. “The name Robinhood is very aspirational to us because it’s a little bit rebellious.
Both Baiju and Vlad are the children of immigrants. Vlad’s family emigrated from Bulgaria, and he moved to the U.S. when he was five years old. They met at Stanford University where they became friends and eventually roommates.
Related Topics:
Up Next

Things you need to know about iPhone X.

Hurricane survivors use Zello app to get help.

Domino’s is launching a pizza delivery robot car for customers

Phone app that alerts users to look up while taking a walk.