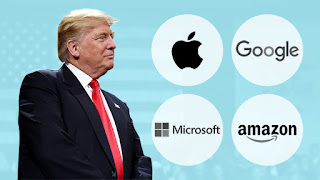 The CEOs of Apple (AAPL, Tech30), Microsoft (MSFT, Tech30), Amazon (AMZN, Tech30) and Google’s parent company Alphabet (GOOGL, Tech30) joined more than a dozen other tech leaders for the first meeting of the American Technology Council on Monday.
The group met with Trump and other members of his administration throughout the day. The main agenda, at least on paper: talk through ways to modernize the government’s technology infrastructure.
Trump introduced the tech executives as “special people” who employ “hundreds of thousands” of American workers and are “on the absolute cutting edge of innovation.”
Facebook was the only one of the top five tech companies that didn’t attend. Nu Wexler, a spokesman for Facebook, said this was due to a “scheduling conflict.” There are some notable absences this time around. Elon Musk, CEO of Tesla and SpaceX, is not on the list.
“The goal of the CEO’s is to lead a sweeping transformation of the federal government’s technology that will deliver dramatically better services to the citizens and stronger protection from cyber attacks,” Trump said in opening remarks. This is the second time the CEO’s are scheduling a meeting with the US president.