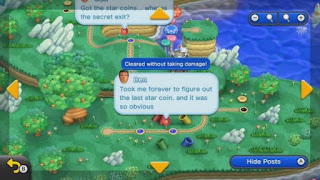 Nintendo has announced that its Miiverse social network will be closed down on 8 November. It also appeared in some popular 3DS games, but the posts will disappear in November.
Miiverse was launched in 2012 alongside the Wii U games console and could be accessed on the 3DS, but did not appear on the new Nintendo Switch. The platform lets players post messages and drawings on game-related message boards, and share tips and hints.
Announcing the closure, Nintendo said: “All services offered through Miiverse, including reading and submitting posts and exchanging messages with friends, will no longer be available.” While games will still work after 8 November, some key features will disappear.
–          Super Mario Maker will still let players share their creations, but other players will not be able to comment on them.
–          Mario Kart 8 will no longer let players share clips to YouTube.
–          Super Smash Bros for Wii U and 3DS will no longer display drawings in the Miiverse stage, and players will not able to create tournaments.
PICTURE CREDIT: Nintendo