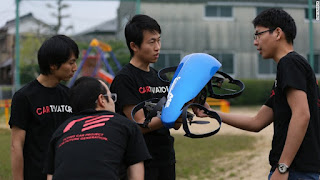 If successful, the SkyDrive, which has three wheels, four rotors and uses drone technology would fly at an altitude of 33 feet (10 meters), reach top airborne speeds of 62 miles (100 kilometers) per hour, and zoom along at 93 miles (150 kilometers) per hour on land.
A group of Japanese inventors is working on the ambitious plan to launch the flying car, the SkyDrive, by the 2020 Summer Olympics in Tokyo. The Cartivator Project, a Tokyo-based non-profit, is leading the futuristic pursuit, and it has a special ambition for the vehicle.
Some companies in the United States, United Arab Emirates, Germany, Netherlands and China are also trying to develop a flying car, which is putting the Japanese inventors under a tough competition.
Today, the project has 30 volunteers from backgrounds as diverse as the automobile, aviation and IT industries. They plan to have a remote-piloted prototype running by summer 2018. 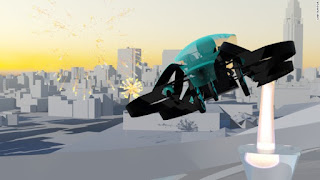 While they receive no financial support from the government, last month Japanese automobile giant Toyota announced it would give 40 million yen ($365,260) to the project. While flying cars have regularly made appearances in science fiction films, they could soon become reality.
PICTURE CREDIT: Cartivator.