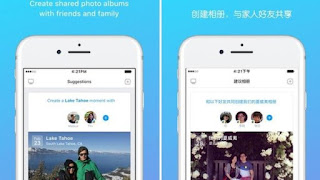 The app, called Colourful Balloons, was launched in May and is almost identical to the Facebook Moments app. It was spotted by the New York Times on Friday. The BBC understands that part of the reason the app was not branded as Facebook was to study how apps organically gain users in China.
“We have long said that we are interested in China, and are spending time understanding and learning more about the country in different ways,” a Facebook representative told the BBC.
“Our focus right now is on helping Chinese businesses and developers expand to new markets outside China by using our ad platform.”
The BBC has not been able to confirm whether the Chinese authorities are aware that Facebook launched the app in the country. However, the app works with WeChat, a leading messaging app by Chinese social media giant Tencent.
Facebook and many other Western internet services are blocked in China, which has a strict internet censorship policy. Facebook was blocked in 2009, while its photo-sharing app Instagram was banned in 2014 and the encrypted messaging app WhatsApp was partially restricted last month.
China now has the world’s largest online market with 731 million users, according to latest statistics from the China Internet Network Information Center (CNNIC).