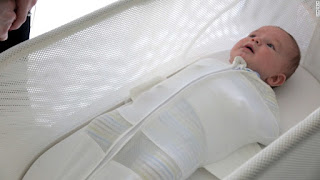 A high-tech bassinet, called the Snoo, kept a baby that is almost six months old asleep all night. The product was developed by famed pediatrician Dr. Harvey Karp, MIT-trained engineers and Yves Behar, whose industrial design firm has worked with companies like Samsung, Prada and Kodak.
The Snoo, which took five years to develop, recreates sensations experienced in the womb. During those first few months of life, often referred to as “the fourth trimester,” newborns are most comforted when they hear white noise, feel movement and are swaddled.
The Snoo does all three: You place the baby into a sleeper outfit securely attached in the bassinet. The Snoo senses when a child is fussy and moves from side to side until the baby is calm. You can set the rocking to continue through the night or turn off after eight minutes. You can also control the speed and white noise through the accompanying app. 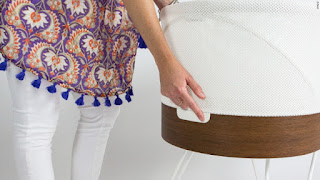 The Snoo ($1,200) is the brainchild of Dr. Karp, known for popularizing the concept of swaddling newborns. He’s also the author of “The Happiest Baby on the Block,” which details his well-known 5S’s approach to calming a baby. The Snoo comes with three outfits — small, medium and large.
IMAGE CREDIT: cnn tech